Chris Lenart on Life With Cerebral Palsy and DisabilityAwareness.us

Editor’s Note:  After a difficult childbirth in which both baby and mother’s lives were in danger, Chris Lenart’s parents discovered he had cerebral palsy shortly after. In an era where children with disabilities were often institutionalized or segregated into educationally subpar programs, Chris’ parents did everything in their power to ensure he received solid schooling. Once he was finally allowed to enroll in a public high school, he excelled. Chris communicated with Wheel:Life writer Betsy Bailey via email to tell us about his life with cerebral palsy, his accomplishments, and what he is currently working on — DisabilityAwareness.us.

Chris, tell Wheel:Life a little bit about your disability.

I have cerebral palsy and am non-verbal. I was born on time, but my lungs did not open right away. There was only one doctor in the operation room, and 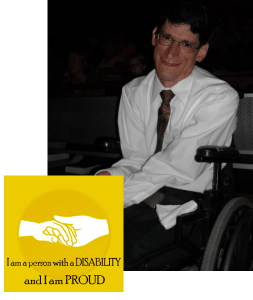 my mom was bleeding pretty badly, so he was running between the two of us to keep us alive. Cerebral palsy affects my ability to do daily activities like dressing, feeding myself, walking, and many other things.

The technology you use to communicate looks pretty amazing. Can you explain how it works?

I use an iPad to talk, and I have an app called Proloquo4Text. I have used many communication systems during my life, and this one is by far the best ever. I also use many other apps on my iPad throughout the day for texting, communicating with friends, watching TV, and other things. The systems I’ve used in the past were for talking only, and they were very expensive compared to the cost of an iPad. With an iPad, I can upgrade every few years and still pay far less than I would for a traditional communication system.

You went on to college after a less than ideal secondary education. What was it like being in college with a disability in the early ‘90s?

Back in those days, there were no cell phones, iPads, or social media, and the Internet was just starting. Today, I wonder how I survived; I am talking about safety-wise. The University of Illinois at Urbana-Champaign is huge. They had buses for students with disabilities, but if you missed it, you had to 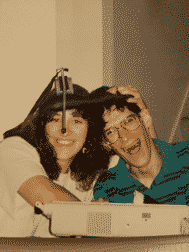 walk. I remember one day, it had snowed heavily the night before. I had a test on one end of campus and then a class on the other side. I had to walk there and back to my dorm. It was scary not knowing if my wheelchair would get stuck in the snow. I did make it home safely, but I was really cold from being outside for such a long time.

Making friends in college was amazing.

I had a lot of friends from the Newman Center where I went to church. During my freshman year, I went on a retreat, which allowed me to make friends. I needed help with homework, so it was easy to find someone among my friends to help me.

Professors were nice and helpful. One professor helped me with taking tests. It was a computer science class, and if you don’t know how to write the answers, it would take hours and hours explaining how to do it. I would get frustrated and did kind of badly on the tests. That professor made test-taking easier because he knew where to put things. He gave me a summer internship and became my advisor because he understood me really well.

After graduating with a degree in computer science, how did your professional career evolve?

In September 1994, I worked at HSBC, which was Household International at the time. I started off as a programmer analyst and later, moved into a project lead role. The last project I led had a budget of two million dollars. In 2009, I was let go along with thousands of other people due to the economy. 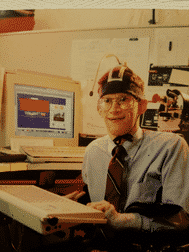 Around 2005, a diversity group for employees with disabilities launched. It was in New York, so I started listening in on their meetings via the phone. Soon after, I decided to start a group in Chicago. I found out there was another man who had the same thought as I did, so we filled out the paperwork, and got it approved. I was the president of the group. Every October, we organized many events for Disability Awareness Month. I would say that started me on the journey to do the kind of work I’m doing now.

How did the idea to start DisabilityAwareness.us come about?

In 2013, my friend asked me if I wanted to write a book about our lives with cerebral palsy, and I said yes. It took us two years to write it, but I felt like I still had more to say, so I started a YouTube channel and a website for disability awareness. I thought we needed a website to market the book and let people know we were available to for talks. Last year, we split up, so I now focus on the blog part after the YouTube channel failed.

I would like to grow it into something that includes every disability. Every day, there will be a blog post about a certain disability topic. I want people to contribute useful posts. If I’m able to get enough online visitors and customers buying the products, I want to provide more online courses.

I want the website to help people with disabilities financially somehow.

I don’t know how it will work yet, but before that happens, I really need traffic to the website to increase. I would also like to get more public speaking opportunities.

You developed a method on How to Hire, Fire, and Maintain a Personal Care Assistant. You are now offering your expertise in the form of an online course. What do you hope people will get out of this course?

When I moved out on my own in 2010, I didn’t know how to hire a personal care assistant. There were a lot of trials and errors. I thought if I had trouble, there must be other people struggling, so I thought an online course could be helpful. I was following someone on YouTube who has a lot of online courses, and I thought I could do that as well. It took three months to make it. Currently, I’m not getting a lot of people signing up to take it. The people who have completed it thought it was excellent and really helpful. It is a great price, so I encourage people who might benefit from it to enroll.

Editor’s Note:  The course costs $20 and is comprised of three sections with four modules each. All videos are accessible online and contain information on figuring out what you need in a PCA, interviewing, and how to deal with an assistant who isn’t working out. For more details, see the course curriculum at DisabilityAwareness.us/course/course-pca. 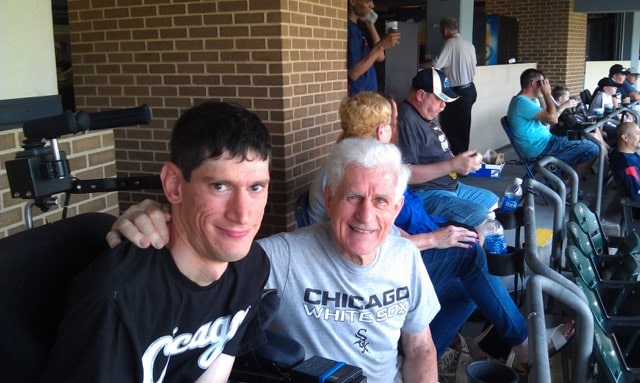 Tell me about your public speaking experience. What subjects do you speak on?

My friend and I did five talks about our lives with cerebral palsy and our education. My three main favorite topics are Life with Cerebral Palsy, My Education, and Faith and Disability. With these talks, they are educational for the audience, but also personal.

I want people to come away with a sense of purpose in their lives.

Besides this, I want employers to realize they can hire someone with a disability. After I was let go from HSBC, I tried to try to get another job. I had a few interviews where I felt like I had a really good shot at a position, but none of them panned out.

Do you have any advice for someone with a disability who may be struggling to find their place in this world?

I know I have to keep trying so that one day, I can say I gave it my all.

You have to keep trying, and never give up. I have been doing this for four years now, and I can’t just give up. It is the same with you. You cannot give up.

This interview has been lightly edited for length and clarity.