Coach Amaro Talks about the Benefits of Adaptive Sports

Editor’s Note: At the age of 21, Luis Amaro was shot at several times while fending off two men who were attempting to rape his sister. One of the bullets hit his spinal cord injuring the T10 and T11 vertebrae. His sister was safe, but Amaro would spend the next few months at Jackson Memorial Hospital recovering and learning to adapt to his new life as a paraplegic. It didn’t take him long to get back to living, though. Just months after his injury, he joined a wheelchair basketball team. Successfully adapting his game from a standing to sitting position led to a 17-year career in the National Wheelchair Basketball Association. Since retiring, he gives back to the sport as a volunteer coach for the Fort Lauderdale Junior Sharks, the first NWBA-sanctioned juniors team in the state of Florida. Wheel:Life talked to Amaro about the benefits of getting involved in adaptive sports after injury. 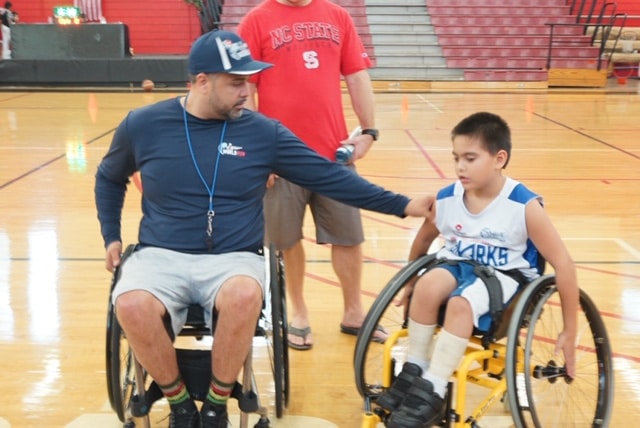 Getting On with Life

I was very active before my injury. I played baseball, basketball, football, and participated in track and field in high school.

My legs were truly missed when I was shot.

Recovering from my injury was difficult, but I come from a very big, positive family. If I told you I never got depressed, I'd be lying to you, but their support, as well as having a great team of clinicians at Jackson Memorial Hospital, helped me accept the 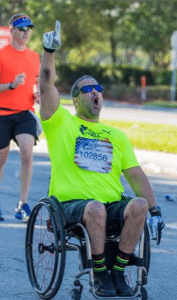 situation pretty quickly. I got my driver’s license just three months after my injury while I was still in rehab. When I got out of the hospital, my driving instructor offered me a job at her office which allowed me to get back into the community right away.

Shortly after I finished rehab, the psychologist from Jackson Memorial asked me to talk to a new patient who had the same injury. That’s how I initially got involved with peer mentoring, and I still do it today. I go to the hospital and talk to newly injured people. I follow them for three months and give the doctors a weekly report on how they are adjusting.

Providing the people I mentor with resources on support groups and adaptive sports programs is important as well.

Playing adaptive sports was my way out of depression. I got involved with the Miami Heat Wheels basketball team while I was still an inpatient when the coach came to the hospital to recruit. I thought wheelchair basketball sounded fun but difficult at the same time. Once I tried it out, I ended up loving it and meeting so many great people. Being involved in adaptive sports is amazing. It can take your mental state from depressive to being the happiest person ever. 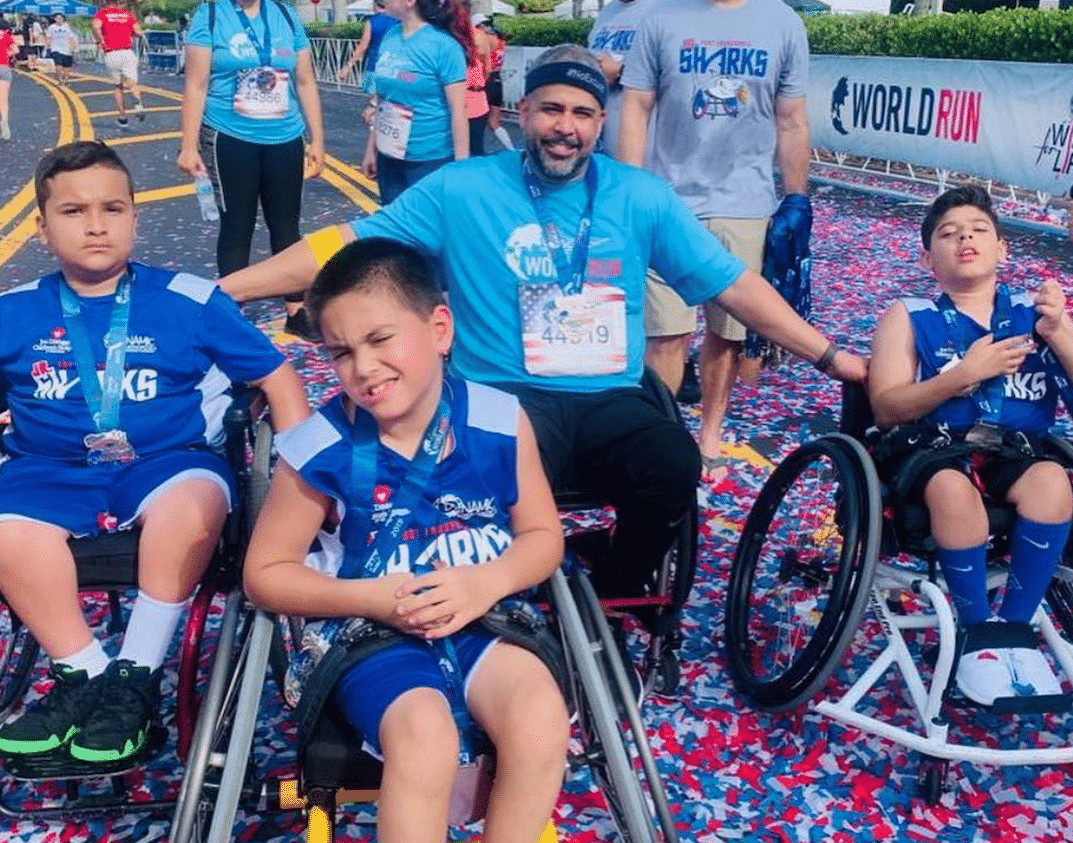 When I got on the court in a wheelchair for the first time, I looked up and wondered how I was supposed to shoot the ball all the way up to the basket. I was 6'3" when I was standing. Now, I'm four foot something. It was very hard to adjust, but I had a great coach who taught me everything I needed to know. We practiced a ton, and I gave many years of hard work, determination, and discipline.

I played wheelchair basketball for 17 years: 15 with the Miami Heat Wheels and 2 with the Fort Lauderdale Sharks. From 2005-2015, we went to nationals every year. I got to travel to so many places. After a long run, I retired a couple of years ago because of shoulder injuries and my age catching up.

Throughout the 10 years that I went to the national championships as a player, the juniors tournament was always happening at the same time. When the team would have downtime between games, everyone else would head back to the hotel to rest, but I would go watch the juniors games. I enjoyed seeing the way they interacted with each other. When they would make a basket, they’d celebrate as if they’d won the national championship.

It was so amazing to see one of them score knowing that it very well could have changed that kid’s life forever. 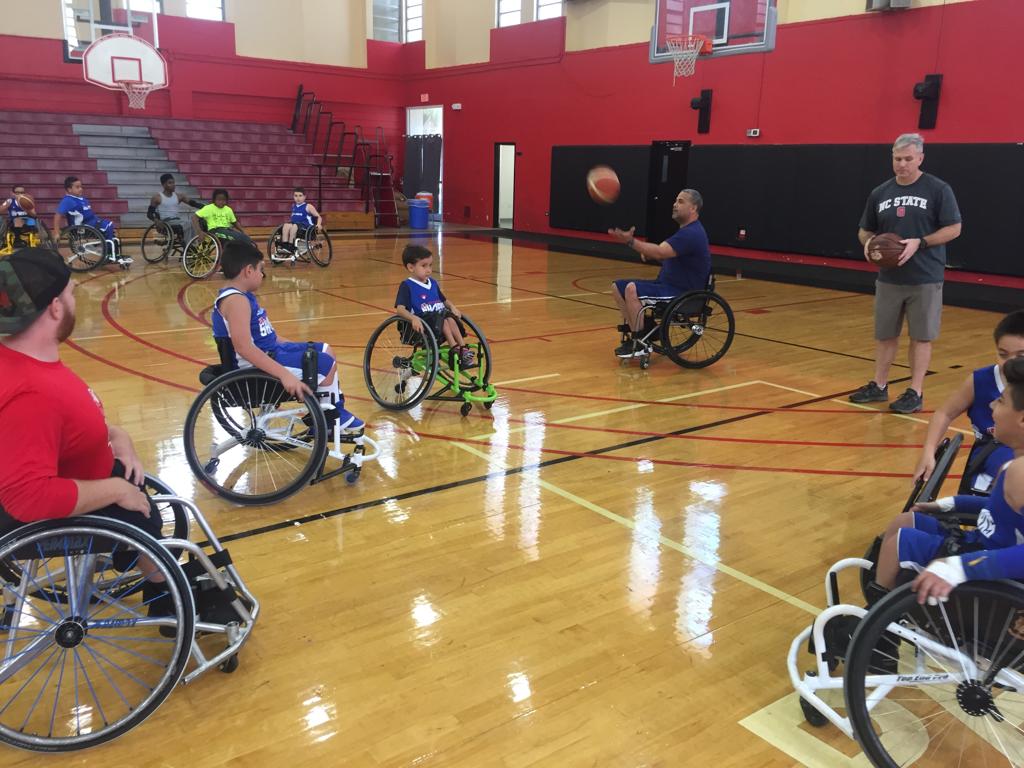 When I came over to play for the Fort Lauderdale Sharks, I was asked if I wanted to help start a juniors program and coach it. I told them, “Yeah, I would love to coach!” I wanted to volunteer my time and teach these kids all that I had learned over the years.

We started by going to Dynamic Orthopedics to talk to them about wheelchair basketball and see if there was interest. Right away, six kids signed up. Today, not even two years later, we're up to 13 kids. They range from age 5 to 13, and they all play on the same team together. The little ones learn how to keep up with the big kids. We currently have 2 girls and 11 boys.

My wife is my assistant coach. She's my equipment manager, and she pushes the kids. If she sees someone struggling, she'll pull them aside and talk them through it. She's also really good with tools, so she can take a chair apart and put it back together if repairs are needed. She's amazing!

Coaching the Fort Lauderdale Junior Sharks has been the best thing I’ve ever done. 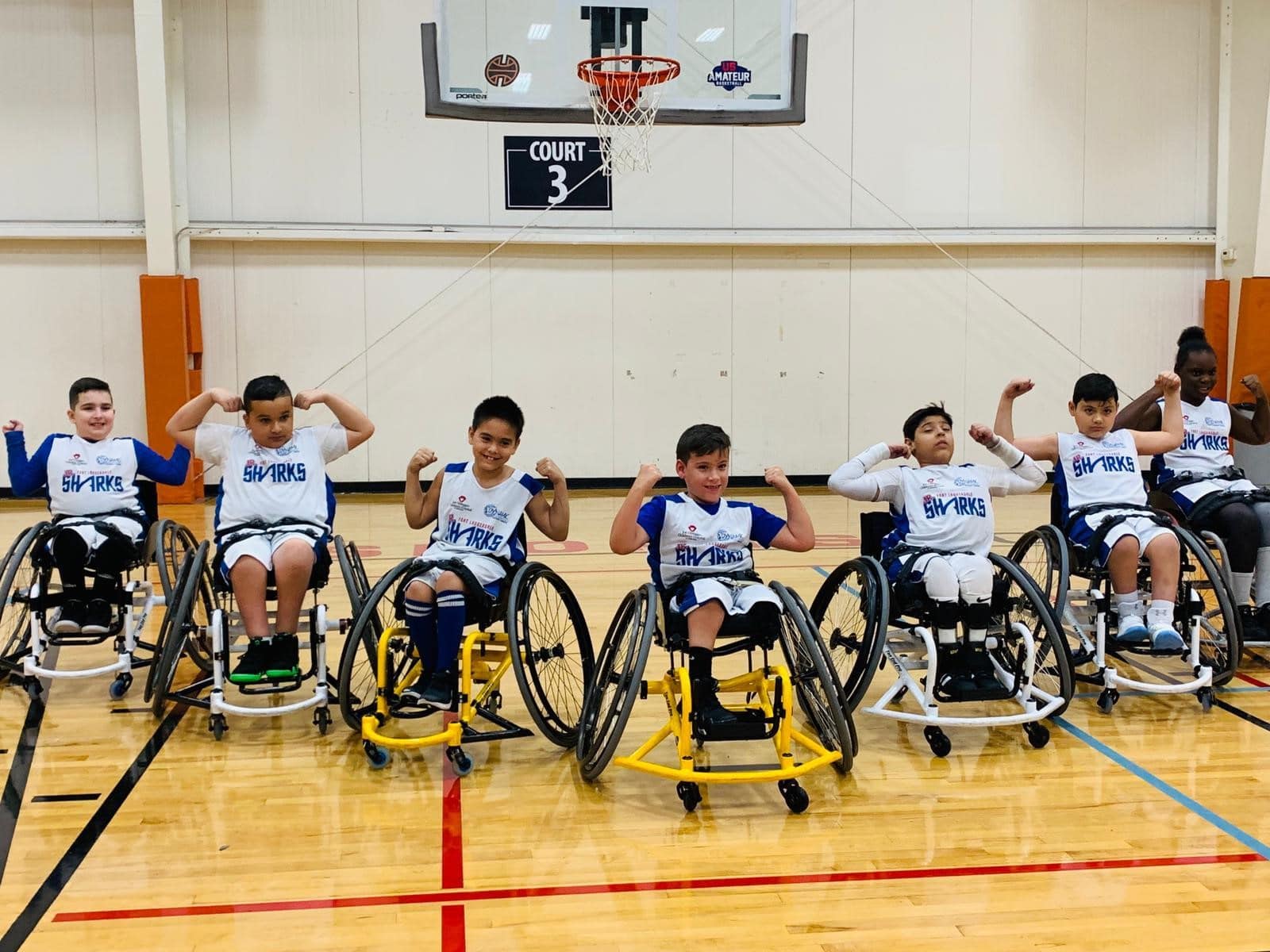 I try to teach the kids to be as independent as possible. The first thing I tell them every year is that I'm not there to baby them.

I'm there to help them become young men and women.

I'm there to teach them the sport of wheelchair basketball and see them transition to the next division as they get older. Teaching them responsibility is important. They shouldn't be blaming their parents when they forget their uniform, for example. 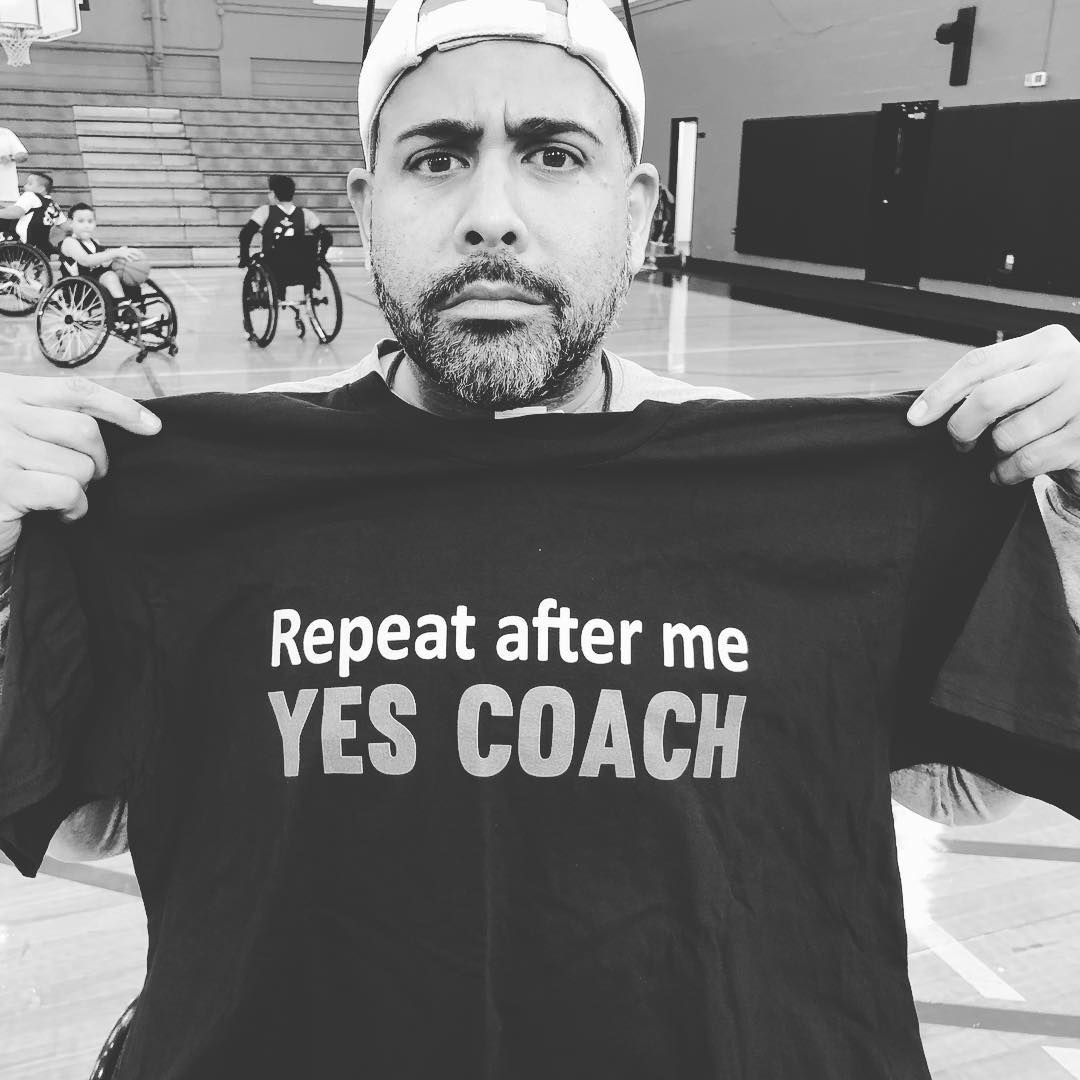 The Fort Lauderdale Junior Sharks was the first juniors team in the state of Florida to be sanctioned by the National Wheelchair Basketball Association. We have also motivated a few other cities to get involved. Jacksonville has a sanctioned team now, and Tampa and Orlando are working on theirs. When that happens, we will be able to have local tournaments. Currently, we have to travel to nearby states for competitions which is expensive.

We are able to do it all through sponsors and fundraising. Our main donors are Joe DiMaggio Children's Hospital and Dynamic Orthopaedic who provides uniforms, basketballs, and some wheelchairs.

Life Outside of Basketball

My son is 21 years old, and we like to be active together. My shoulders can't handle basketball anymore, but I still do hand cycling marathons and row. That's where my time is spent. I also have a beautiful wife that I have to keep happy! 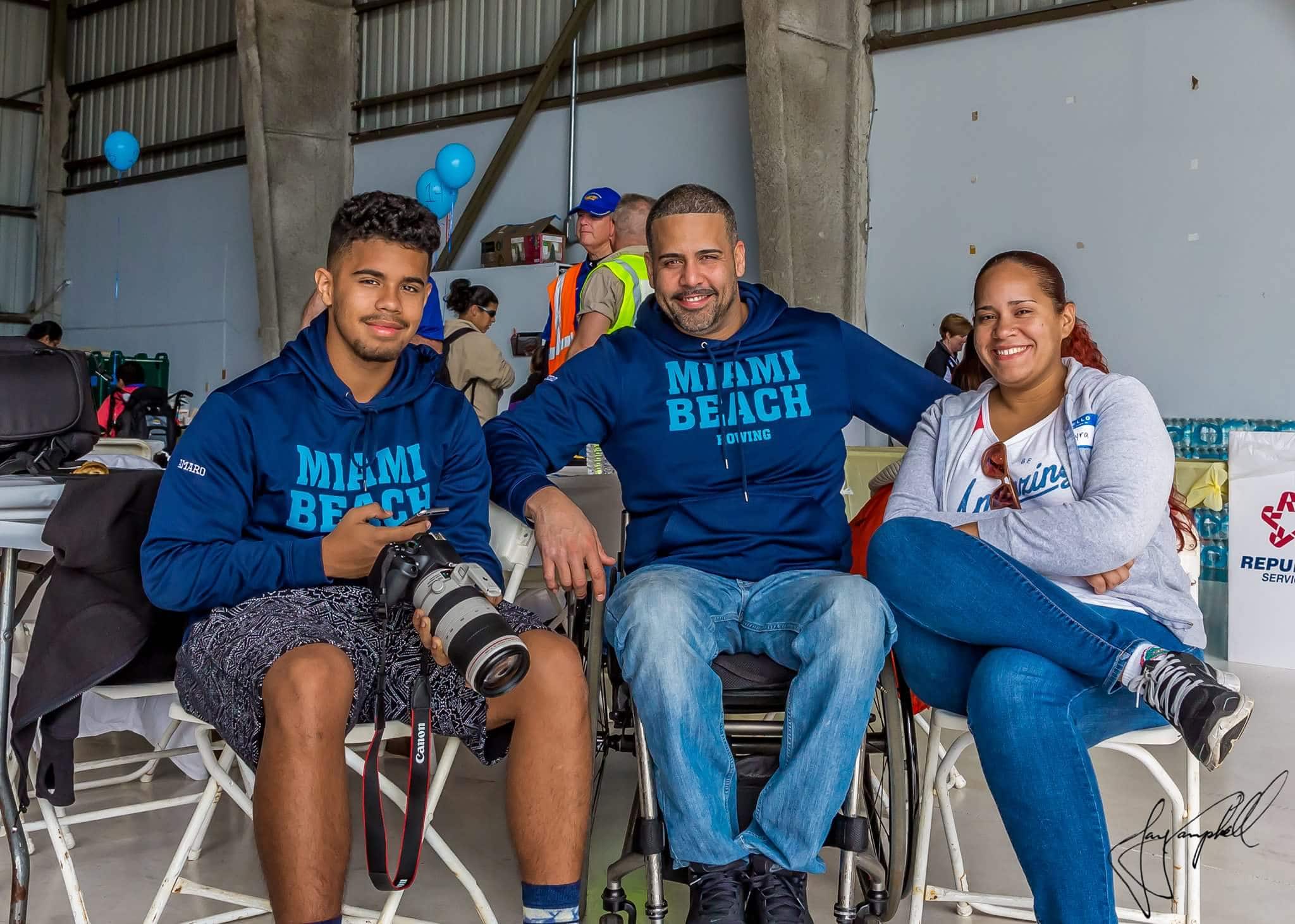 The Benefits of Adaptive Sports

Adaptive sports have done so much for me. Getting involved with wheelchair basketball helped me with psychosocial skills and gave me a sense of camaraderie with my teammates. I met some great athletes and guys with crazy stories of how they got injured. Putting people on the court together who have gone through these tests of adversity makes for a great team. We can all relate to each other on some level, and we’ve learned how to push through hard times.

After being injured, a lot of people want to go home and stay inside, but that's just going to make everything worse. I tell people I mentor that they need to pick an activity they love.

I've done sled hockey, mountain biking, rowing, hand cycling, archery, trap shooting, and so much more. I did it all with the idea that I would find something I loved. I discovered basketball which was my number one for a long time. Then, when I tried rowing, it became my ultimate love. 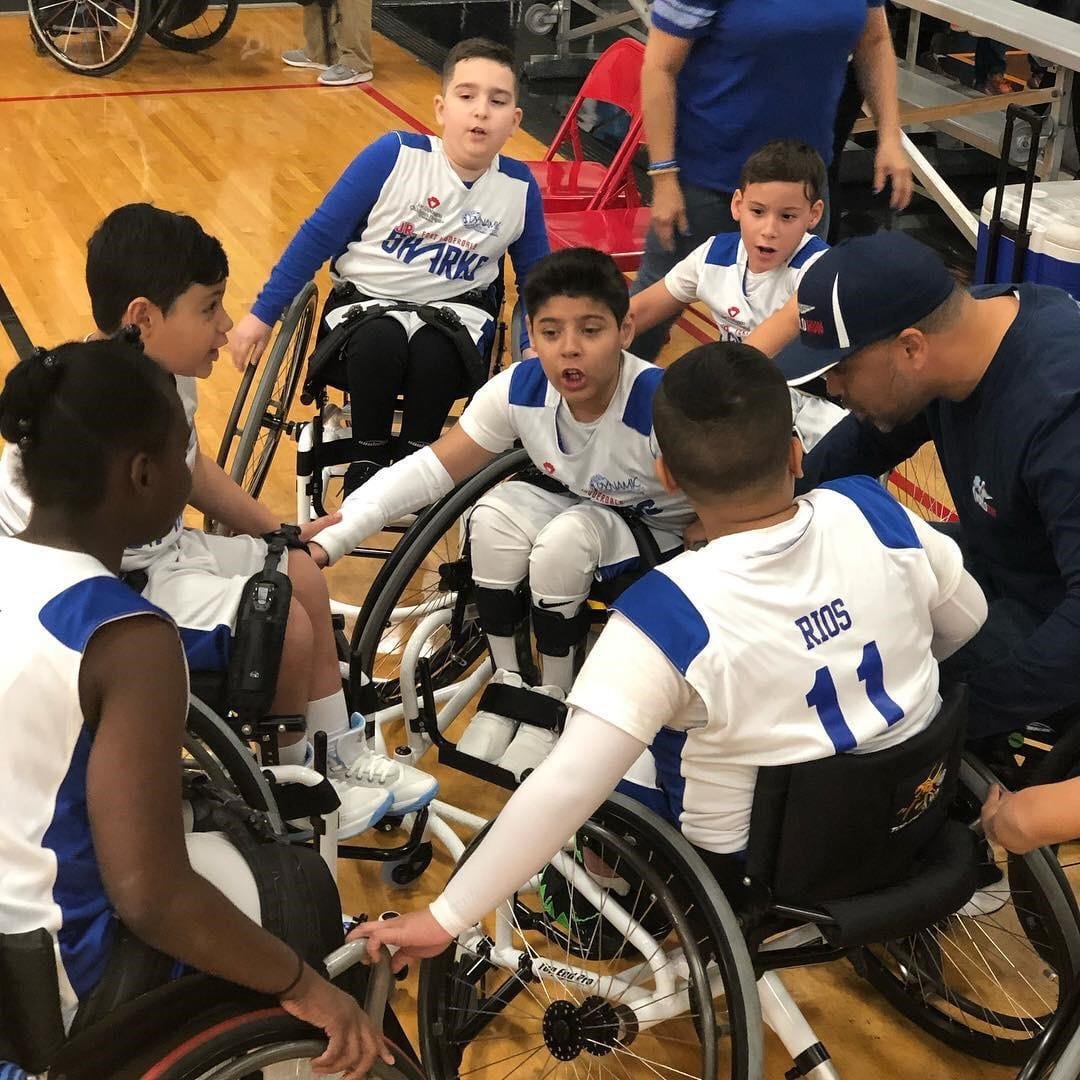 I live by these words: never, ever give up. It's going to get harder before it gets easier. You'll go through difficulties, and then you'll learn how to get over them. I also tell people to focus on character over circumstances. Having a strong character will get you through anything.

When you’re experiencing tough times, try to find an outlet in something you love doing.

Get involved with something positive. It doesn’t matter if it’s school, work, or sports, but don't stay home in bed and get depressed.

Be careful who you get involved with because not everyone in a chair is a good person. Some individuals are going to be bitter for life, and they're going to want to drag someone down with them. Involve yourself with positive people and things, and you'll be okay.

Editor’s Note: If your child is interested in playing, reach out to juniorsharksbasketball@gmail.com.

To find a team in your area, head over to nwba.org/findateam.

All information in this article was extracted from an interview with Luis Amaro.