Editor’s Note: In 1993, Anthony Orefice struck a telephone pole while drinking and driving on his friend’s motorcycle. Lucky to be alive, the 19-year-old suffered a T4, T5, and T6 spinal cord injury. After six months in the hospital, he returned to his residence in Southern California and began his new life as a wheelchair user. Wheel:Life spoke to Orefice about giving back as a peer mentor with the Ralph’s Riders Foundation and how he was able to move forward after his injury.

Meeting the Fornos Family and Giving Back

A couple of months after getting out of the hospital, I went to the Abilities Expo in Los Angeles. I was blown away when I saw all of these people in wheelchairs smiling. I was lucky to meet Mayra and Ralph Fornos there. I think Ralph saw me and realized I was newly injured because I was still in one of those demo chairs. When I saw the two of them, I couldn’t believe a guy in a wheelchair could have such a beautiful wife. I remember Ralph telling me about everything he overcame to become an attorney and have all of this success.

I appreciated that so much because it was at a time when I needed to hear it.

I became good friends with Mayra and Ralph. When Ralph passed away, and Mayra told me she was starting a nonprofit in his name, I wanted to do whatever I could to help. I knew how much he and Mayra had affected my life, so I became a peer mentor with the Ralph’s Riders Foundation and tried to pay it forward by helping as many people as I could. 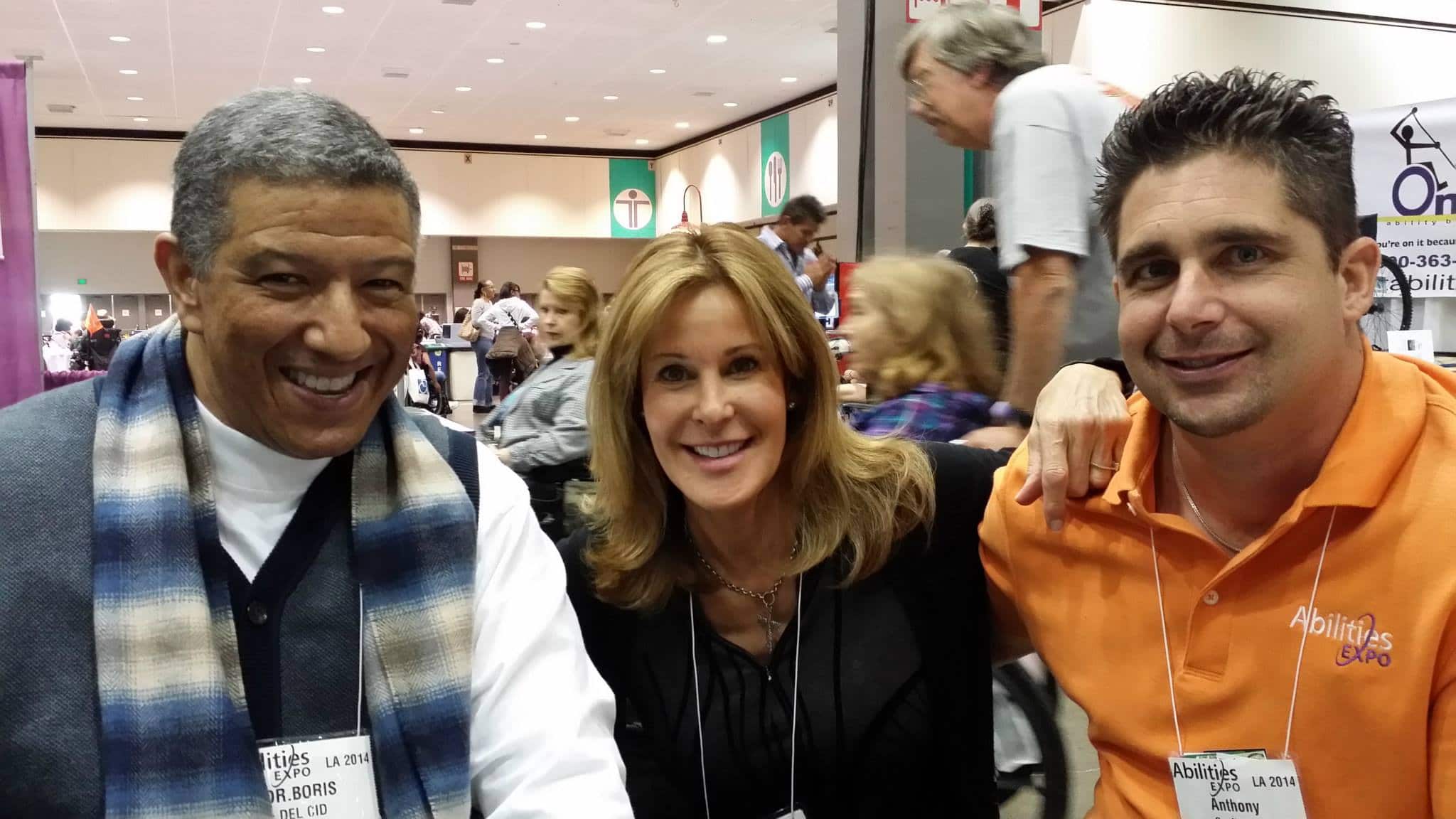 Editor’s Note: To learn more about Mayra and Ralph Fornos and the Ralph’s Riders Foundation, read Love Really Does Conquer All: How Ralph and Mayra Fornos Turned Tragedy into Triumph.

The first year and a half after a spinal cord injury is a living hell, which is why being a peer mentor to the newly injured is critical. When people get hurt today, they only get 30 days in the hospital before being discharged. They have just discovered what a spinal cord injury is, and they're already going home. That's why it's even more powerful than ever for people like me to help out the next generation.

It took me about a year and a half to finally give in. I didn't want to go, but I drove there, got my wheelchair out, and rolled into the gym.

Up until then, I had been babied.

Anytime I’d play sports at the park with friends or family, they would let me take shots without trying to block me. That's not a lot of fun when you're used to being a competitor. When I rolled into the gym that day to play wheelchair hockey for the first time, this guy looked at me and asked, "Are you going to play with us tonight?" I told him I was, and he came up to me, pushed me, and said, "You? You’ll have to get by me." I thought, "Wow! I just got my first push in a year and a half of being hurt. Bring it on, buddy!" 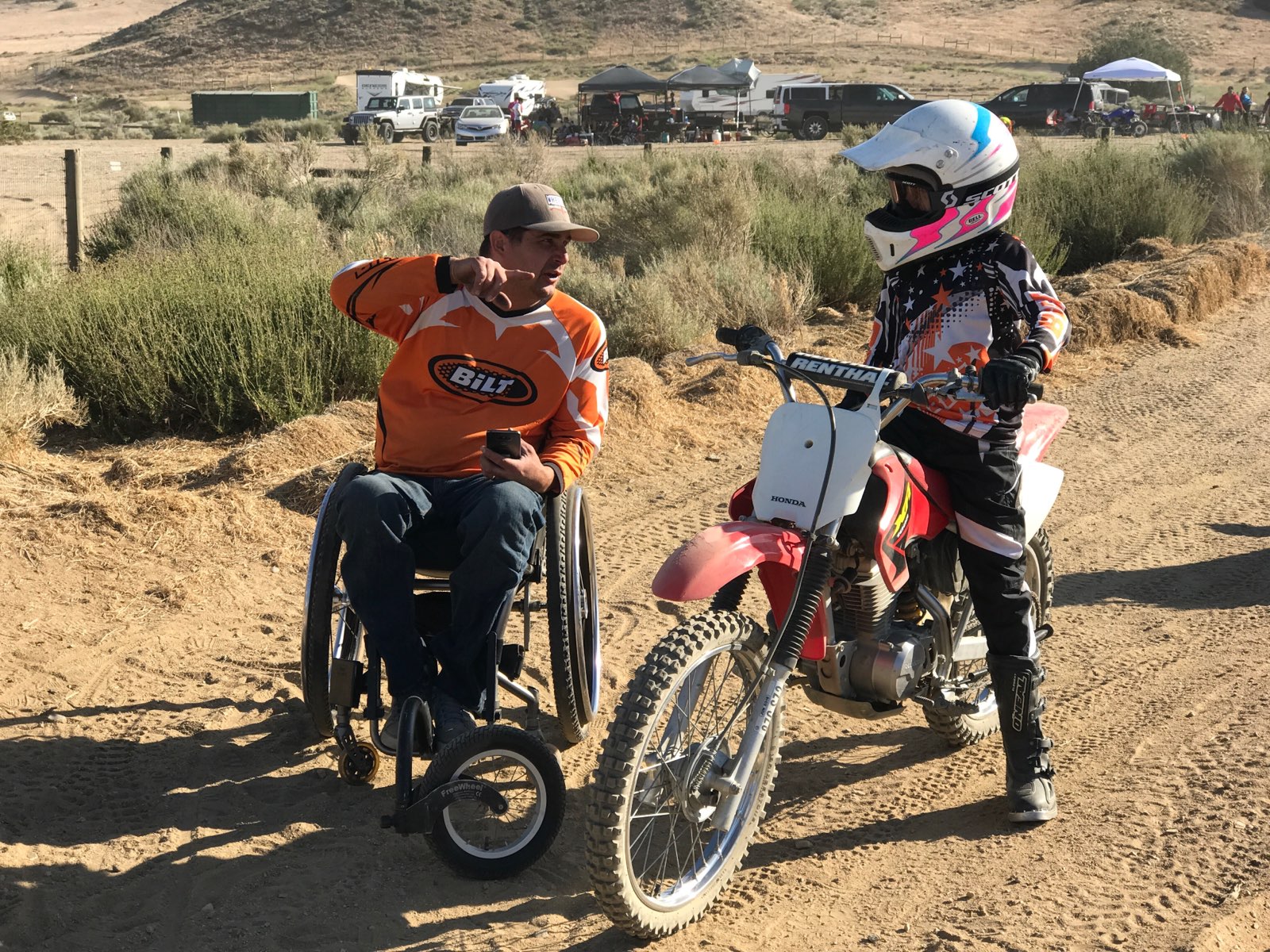 It was the coolest thing because these guys didn't want to be in wheelchairs either, but they were making the best of it. The light went on that day.

I sweat for two hours and had the time of my life. I got to compete again.

Getting involved in sports also helped me in my everyday wheelchair life. Once I started playing hockey, I was able to hold my cell phone and roll with one hand. I learned to do that because it’s similar to holding a hockey stick and rolling my wheelchair.

There are so many assets from playing sports that help fine-tune your wheelchair skills.

Now that I'm a dad and business owner, I don't get to play as much. One of my passions right now is off-roading in my 4-speed buggy. I take my son out bike riding, and I can keep up with him in my buggy. That doesn't burn a lot of energy, though, so I need to get back into sports! 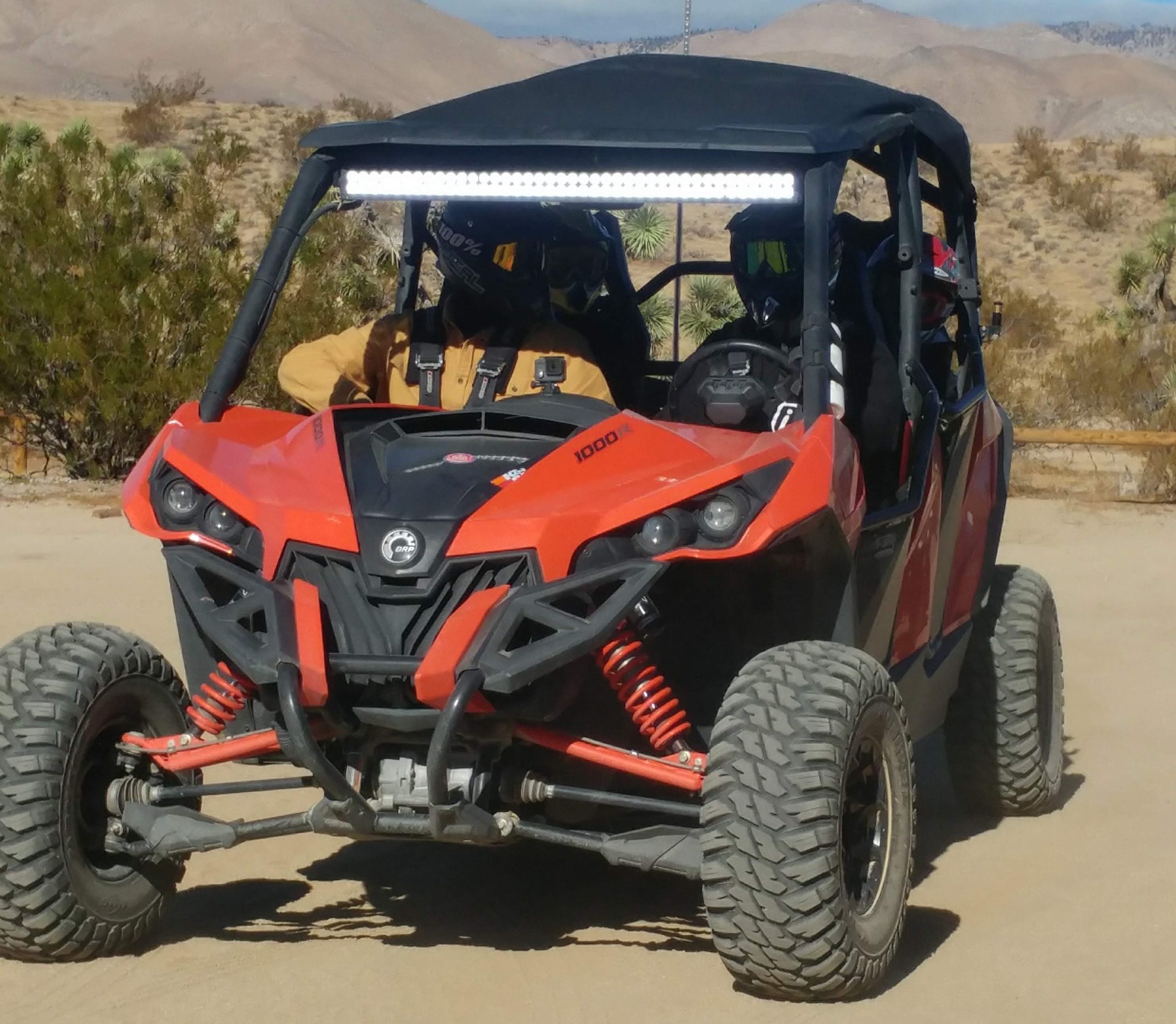 Twelve years ago, my wife and I adopted our son from birth. He only knows a dad in a wheelchair, which I was very leery on. I thought he'd be made fun of by now because kids can be pretty ruthless, but it hasn’t happened. I think I'm actually one of the cooler dads because I can give the kids wheelies and play with them after school. All of the able-bodied dads are at work, and they can’t always make it to the events.

Most people wish they had a little extra time with their friends and family. Since I set my own work hours, I can take the time to drop my son off at school. I'm also his baseball coach and Sunday school teacher.

You become a better person when you experience tragedy.

Whether you end up walking again or not, you look at life differently, and your priorities change. 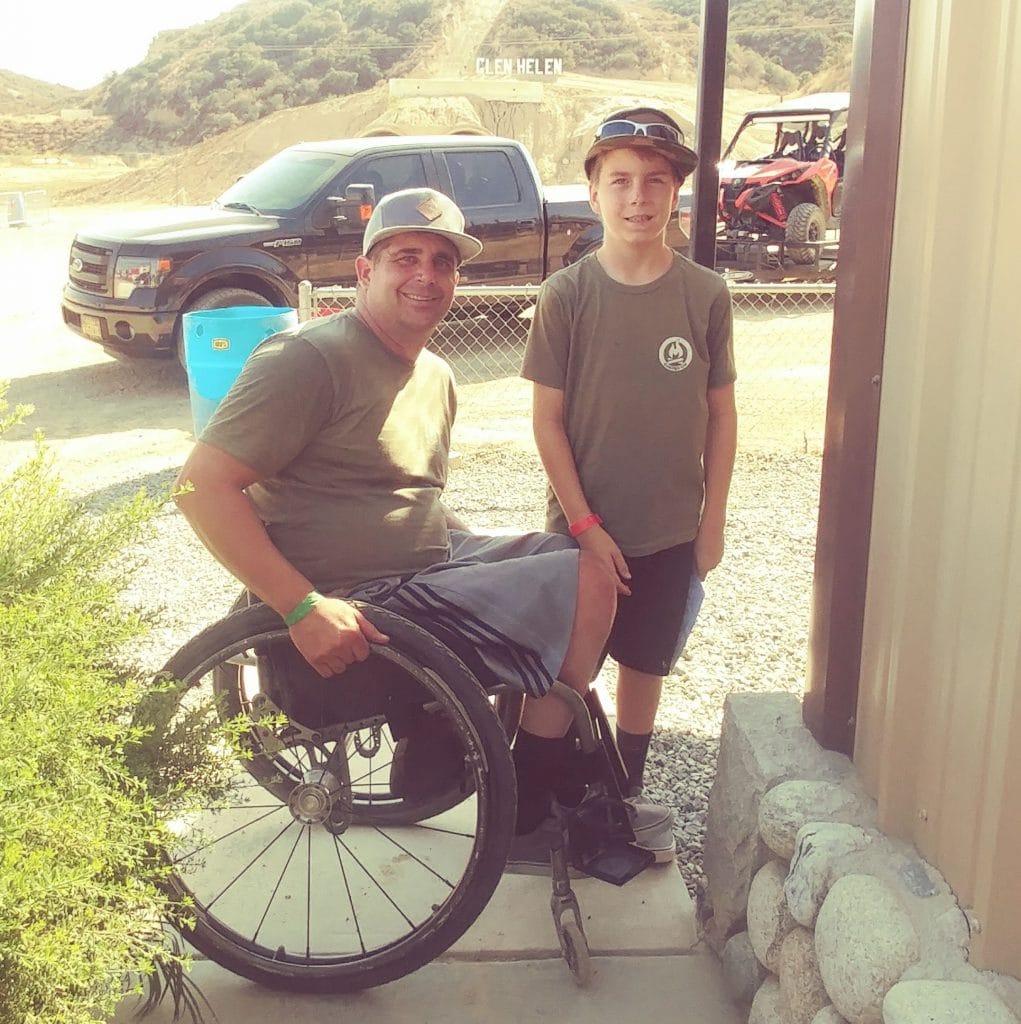 How Ralph’s Riders Helped Me

The Ralph’s Riders Foundation helped me out a few years ago when I was diagnosed with colon cancer. The doctors thought I was going to die, but I'm still here! I’m self-employed, and since I couldn’t work as much at that time, Ralph’s Riders blessed me with a check to help with my deductibles. That was pretty cool because I wasn't expecting anything like that.

You never know when the roles are going to be reversed.

I'm cancer-free going on seven years now. I consider the 26 years since my injury bonus time, and now, post-cancer, I have bonus-bonus time. 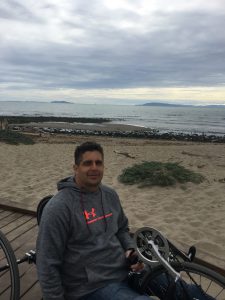 A lot of people get the opportunity to talk in public settings after getting hurt. People are so impressed that you can even smile in a wheelchair. I've spoken at schools and churches in my area. I bring in sports wheelchairs and let the kids sit in them.

I want to show them that life goes on after injury.

I know a lot of wheelchair users who are motivational speakers. It's kind of cool because all we do is tell our stories, and people think it's the best thing since sliced bread. All we're doing is living.

My Advice to the Newly Injured

I tell newly injured people to take it one day at a time and set small goals. Try to get your transfers down. If you can't hold a toothbrush yet, work on that. Relearn all of those seemingly minor things to get as much independence back as possible because that will give you the confidence to get to the next level — driving, starting a business, dating, or any other goal you have. It's frustrating because it's a slow process, but for me, laughter and joking about things helped. If I had taken this all seriously at 19 years old, I wouldn’t be alive today.

Once you get around other people in wheelchairs and realize you're not alone, you’re going to see that this can be a good life.

God got my attention from this as well, and God will not give you more than you can handle if you believe in him. If you don't, good luck!

I try to give people hope. I show them how I get in my truck and take my wheelchair apart in one minute. I've met so many people with different levels of injury, and I haven't seen one person yet not be able to conquer what they decide they want to conquer. You just have to do things differently. You have to think a little bit harder, but you can do it.

In the beginning, being creative might be difficult since you’ve never had to think so hard before, but you'll figure it out. 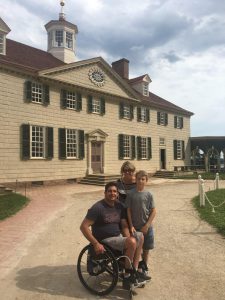 Try to stay positive and surround yourself with upbeat people. If you're around negative people when you first get hurt, you’ll get sucked into their pessimism. There's good in every bad situation, and you have to find that.

A guy came to my hospital room when I got hurt, and he really inspired me. He showed me how he got from the ground to his wheelchair and how he got into his Ford Explorer. I couldn't believe what he could do. He looked at me before he left my room and said, "Anthony, if you can learn one thing from me, I want you to know that I didn't leave the house for four years because I didn't want anyone to see me in a wheelchair. I wasted those years. You're not comfortable right now, but please, go and live life. Just get out and do it." I took that to heart, and I went out there.

Editor’s Note:  For more information on the Ralph’s Riders Foundation, visit RalphsRiders.org, and follow along on Facebook @ralphsridersfoundation.

If you’ve suffered a catastrophic injury or illness in the state of California and are seeking legal advice, visit FornosLaw.com.

All information contained in this article was extracted from an interview with Anthony Orefice. It has been lightly edited for clarity and length.