We Carry Kevan Is Redefining Accessibility

Editor’s Note: In 2016, Kevan Chandler and a group of friends took off on a backpacking trip to Europe. Chandler, who lives with spinal muscular atrophy, typically uses a wheelchair for mobility, but the group’s planned itinerary wasn’t particularly wheelchair-friendly. So instead of looking for ways to explore the destinations from his wheelchair, Chandler opted to be carried around Europe by his friends in a backpack, leaving his chair at home. Wheel:Life interviewed Chandler to talk about the trip, the We Carry Kevan Foundation, and his best travel advice.

Whose idea was it for you to be carried across Europe, and what prompted it?

The idea for Europe was mine, but the concept altogether was a conglomeration. I was part of a pretty amazing friend group who did a lot together in those days, including a weekly potluck at each other’s houses. Some of these houses were wheelchair accessible and some were not, but that didn’t stop us from going to every house, and it didn’t stop them from keeping me involved. Sometimes we would just leave my wheelchair outside and the guys would carry me in, and sit me on a couch or the floor. At one point, we decided we wanted to explore the sewers together, and it was Tom who had the idea of the backpack for that particular excursion. Once we had pulled off that stunt, my lifelong desire to visit Europe (and see things that I knew weren’t wheelchair-friendly) suddenly seemed more possible. 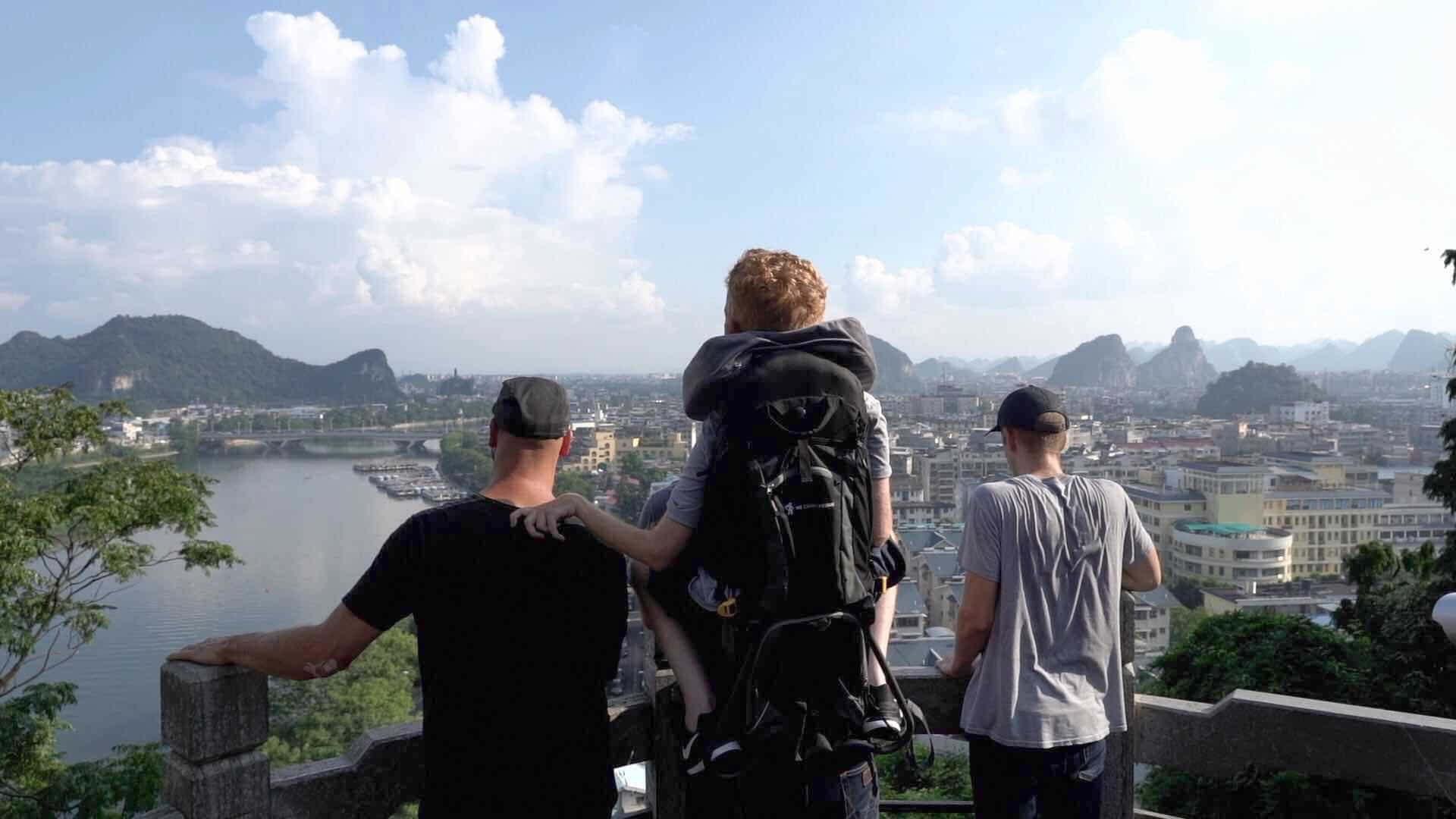 Going back even further, my parents raised me to live in community with others, which certainly was the catalyst for all of this coming together in the first place. So, not only could I not have this crazy experience without the help of my people, I couldn’t have even really conjured up the idea without them either. And I wouldn’t have it any other way.

Were you nervous about leaving your wheelchair behind?

Not really. I think the thrill of it all kind of put those nerves on the back burner until about halfway through our trip. I started missing my chair when we were in London, which proved to be pretty accessible, and I kind of wanted to wander off on my own but couldn’t without someone carrying me. And then I actually did get nervous in Ireland when we started climbing coastal boulders and ancient stairways. My nerves were certainly tested then, but I also got to learn how to trust my friends better than ever.

Did you feel vulnerable at times knowing that you had to depend on your partners to meet your needs and desires while traveling?

We had our moments on the trip. It mostly happened when we came across people who didn’t really get it. For example, we had an encounter one night with a group of ladies who wanted to pray over me for healing.

"They obviously missed the miracle in action right before their very eyes, which was that we had overcome the obstacle of disability through brotherly love and creativity."

In moments like that, I was kind of smacked in the face brutally by the broken world, and it honestly made me feel pretty pathetic. But that’s where we get to see that these friends didn’t just carry me physically. They encouraged me and reminded me of the truth, the deeper truth beyond just my crippled limbs, that because of our love for one another, I was so much more (I am so much warmer) than my disability dictates. 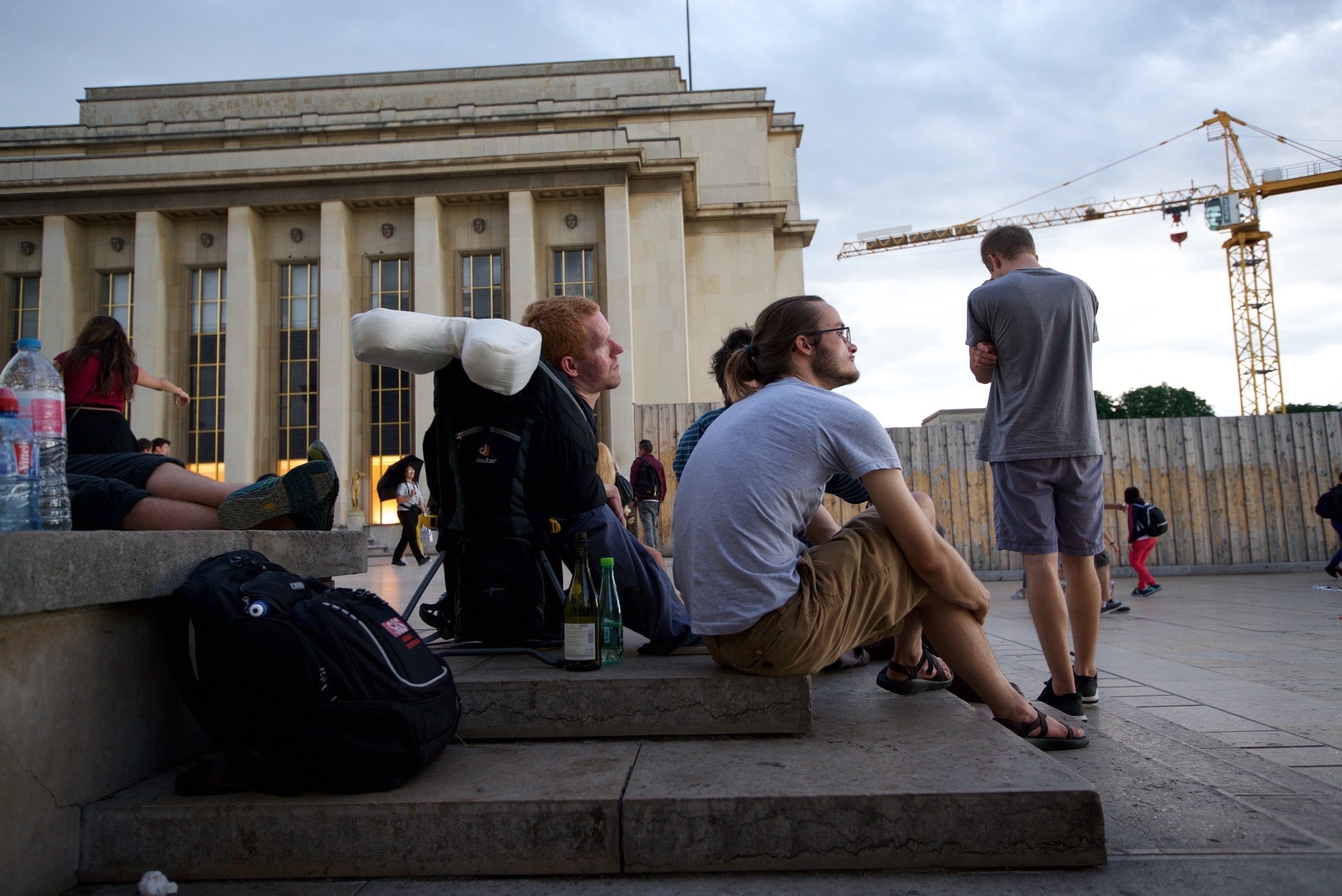 Did your friends do any physical training in preparation for the trip?

Haha, Tom likes to say his regiment for carrying me is, “Beer, yoga, and Jesus.” But in more seriousness, some of the guys took up CrossFit training, while others biked to work to build up cardio. Everyone had different roles to play on the trip, to some extent, and so everyone had kind of their own way of preparing.

What did you do to prepare? 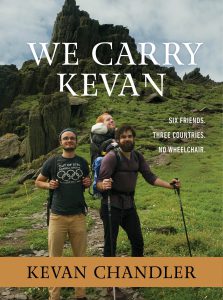 I did a lot of leg and hip stretches in preparation for being in the pack so much. I also honed my journaling methods, so as to best capture memories while still being present. Afterward, we used these journals to write the book that is now out (titled We Carry Kevan), and it was such a fun exercise to go back through and relive our days based on the notes I had made.

Which do you prefer while traveling: using your wheelchair or being carried?

Whichever is necessary or appropriate for what we want to do. Our trip to Europe originally was going to involve both, but we ultimately decided against taking my chair because, with where we wanted to go, it would have been more trouble than it was worth (as in, we would have only used it for a day or two out of the whole three-week trip). On the other hand, we’ve done trips, like when I returned to Ireland later to speak, where we didn’t take my pack because we’d mostly be in the hotel and the venue, and that was it, so my chair was better suited. And still other times, such as when we went to Vancouver Island to speak and hike, we took both my wheelchair and backpack. 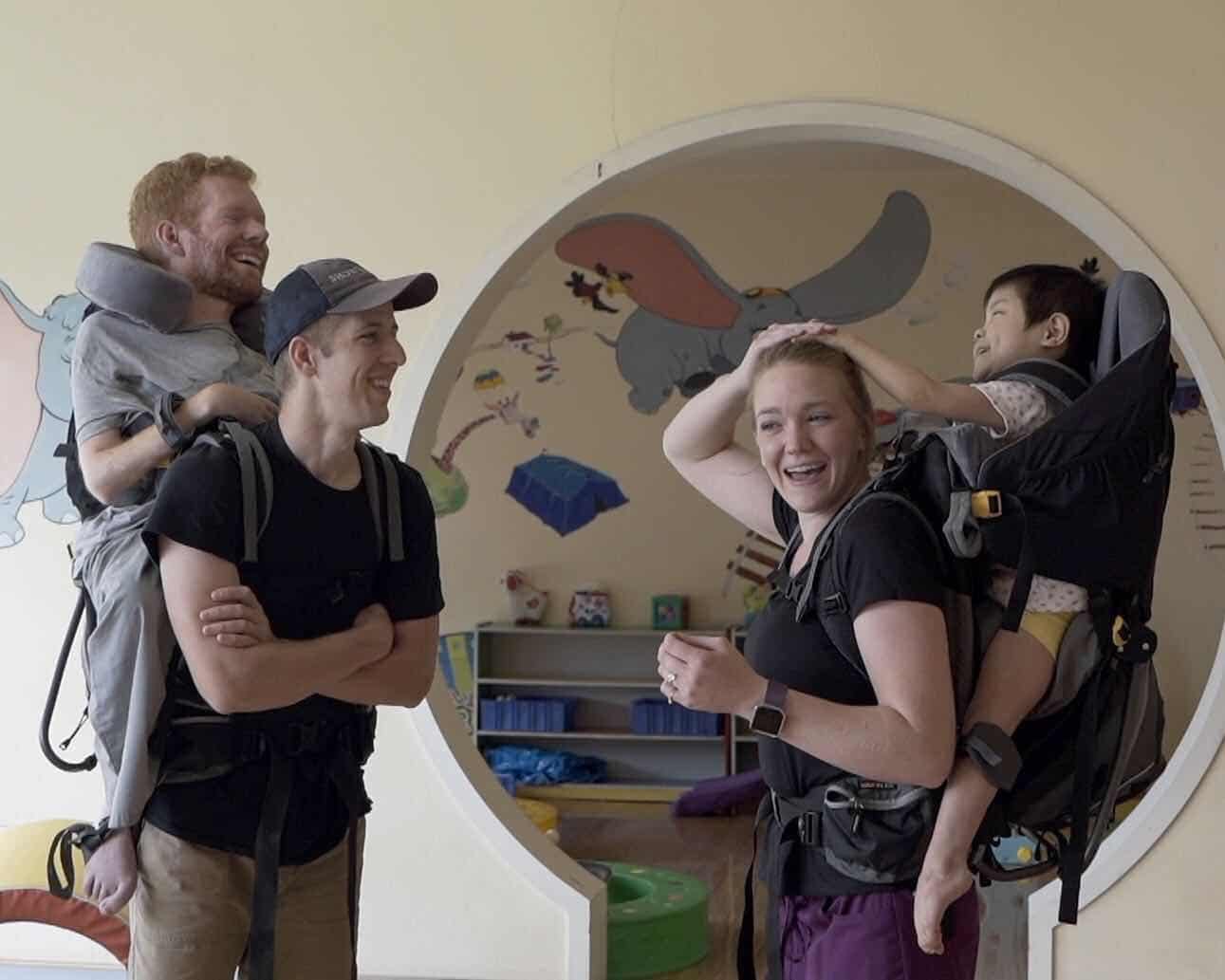 What’s been your favorite destination so far?

Two years ago, we visited a care center in China for children with disabilities. It was, really, a profound experience, and we made some life-changing friendships there, so I’d say that trip holds a special place in my heart.

What destination is on the top of your list that you haven’t been able to go to yet?

We’ve talked a lot about going to Argentina one day to retrace the steps of my great-great-grandfather, who was a traveling missionary there. We think this could be an especially rich experience and would definitely require the backpack and a special team to embark on it with.

Would you encourage others with disabilities to be carried while traveling if it’s an option for them?

I would encourage folks to go where they want to go, do what they want to do, to live life fully with their community, and if that means thinking outside the box, go for it. For some, that’ll be using a backpack, but that’s just the tip of the iceberg.

"Everyone is uniquely limited, and there are literally countless ways to overcome limitations." 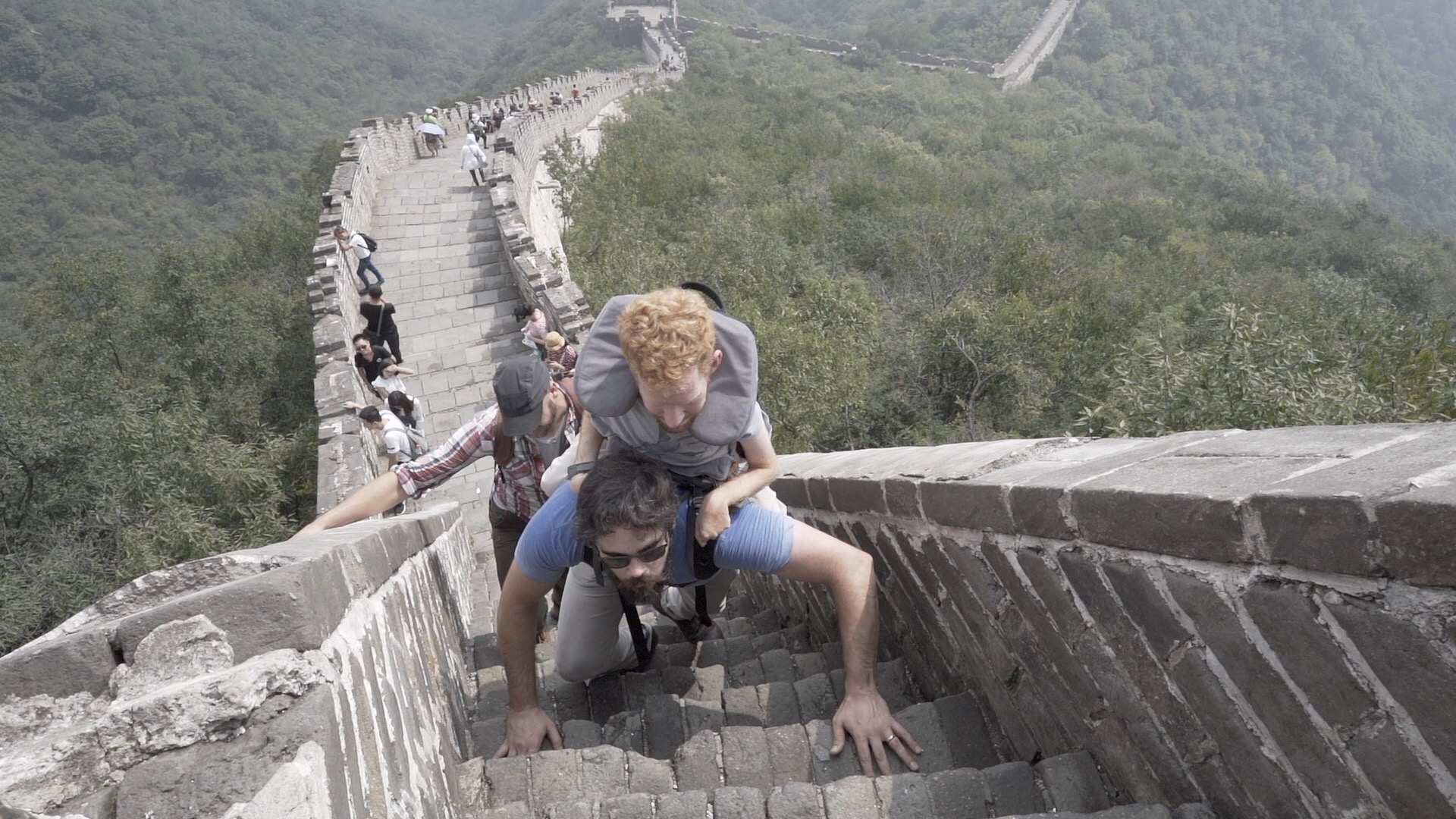 Tell us about the We Carry Kevan Foundation.

Our mission statement is to “mobilize individuals with disabilities by redefining accessibility as a cooperative effort.” What this means for us is that accessibility is about people helping people, which can come in all forms but at the heart of it, has to do with courage, creativity, and community. So our goals are to inspire folks to live this out together and then equip them to do so by introducing people to each other, providing gear (like the backpack), and brainstorming with them to find unique ways of making the world more accessible.

After the trip, we worked with the maker of the backpack, Deuter, to further develop it into a product that we now sell and distribute worldwide. More information can be found on our website, WeCarryKevan.com, including how to order one or sponsor one for someone else. 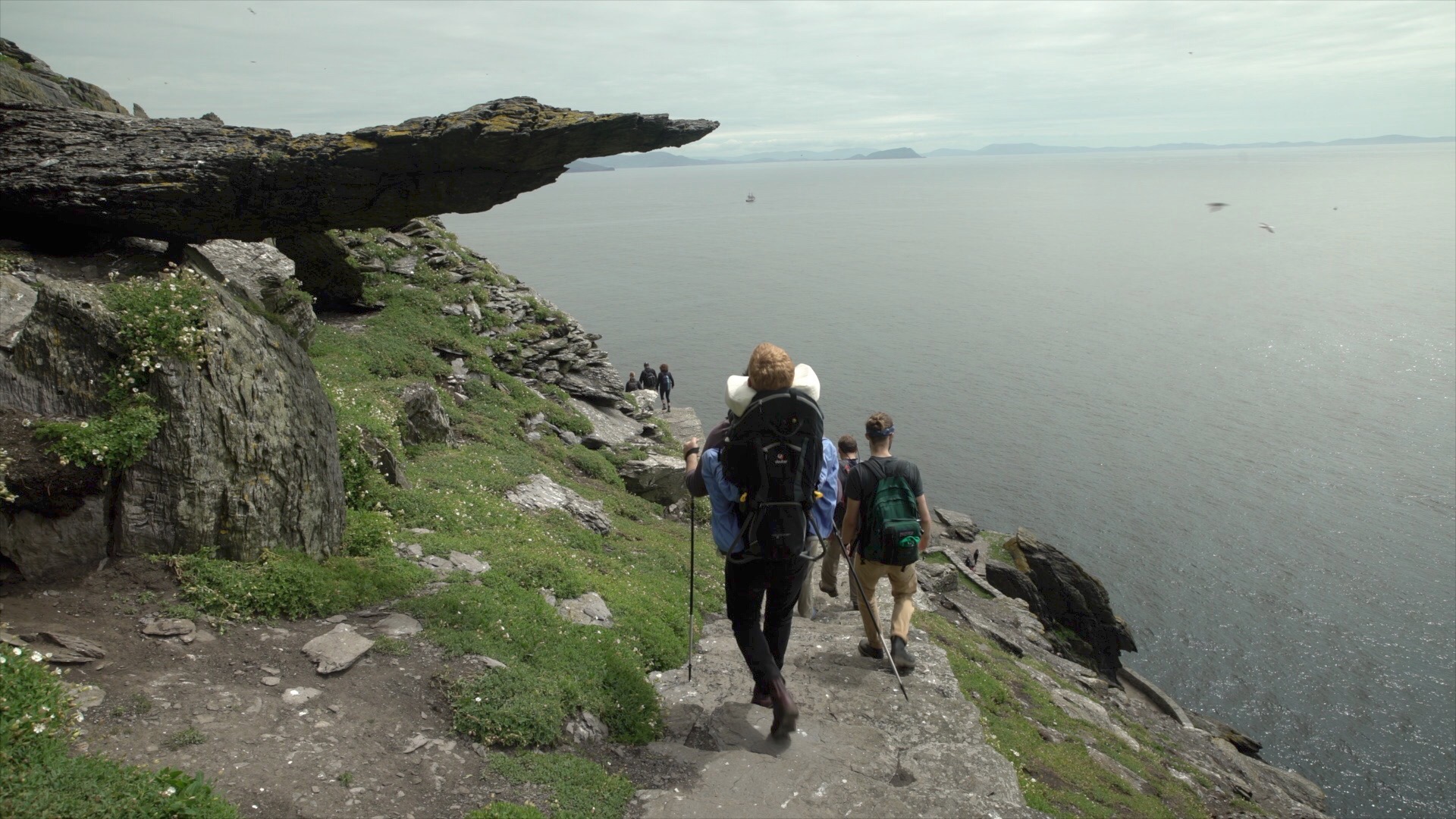 What are your long-term goals with the foundation?

We would love to grow closer to the families we have met, learn from them and encourage them all the same, and continue to meet more families and individuals with which we can do the same. While I love speaking, writing books, and traveling for adventure, I believe the greater adventure is in building relationships. So that is our focus moving forward, to make more personable, lasting, and meaningful relationships and through those, hopefully make the world a better and more accessible place.

What’s your best travel planning advice for people with disabilities? 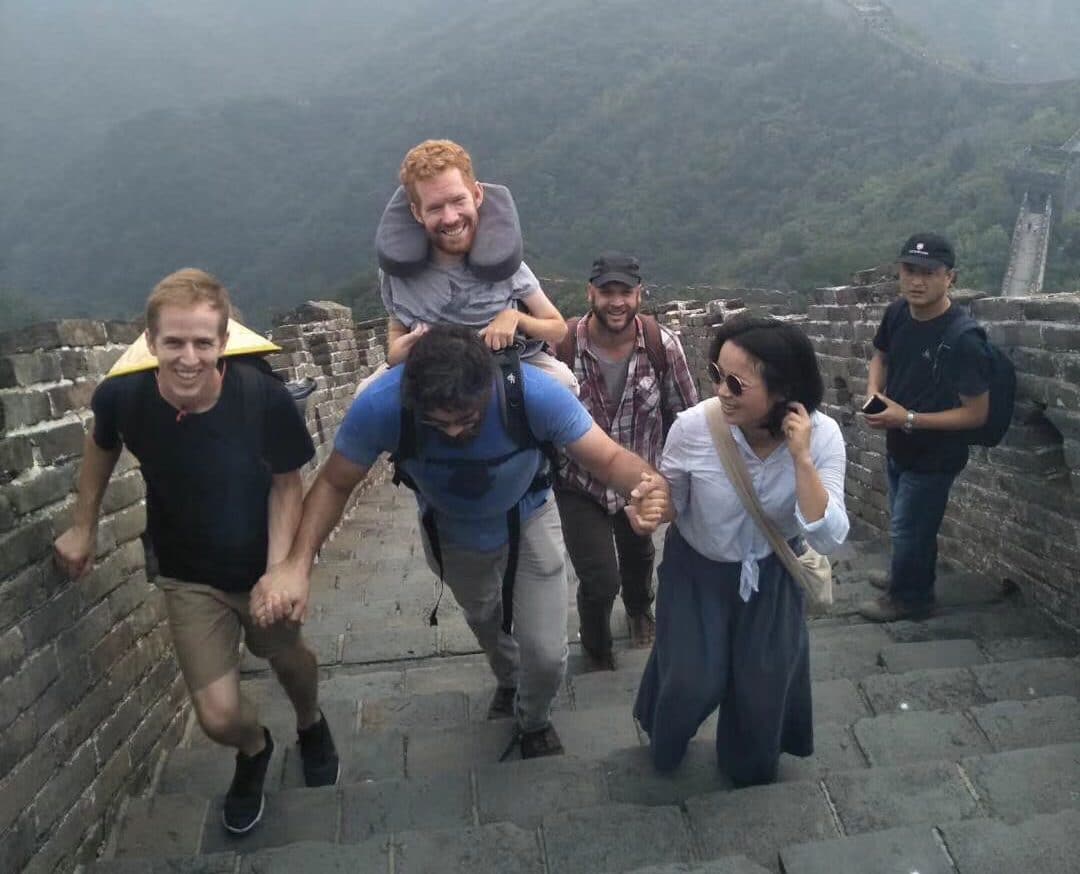 This article was extracted from a written interview with Kevan Chandler. It has been lightly edited.