Are You Prepared in an Emergency? ADAPTS Has Your Back

Editor’s Note: When retired flight attendant Robin Wearley received a call from her friend John Morris (the man behind WheelchairTravel.org) to discuss emergency evacuation protocol for wheelchair travelers, she realized the industry needed to seriously rethink their methods or rather, lack thereof. After Morris mentioned he’d likely have to rely on the kindness of strangers for help in an emergency, she knew there had to be a better way. The next morning, she began working on the first model of ADAPTS, a portable transfer sling for wheelchair travelers. Wheel:Life talked to Wearley at Abilities Expo Boston in September about the specifics of the product and what she’s doing to educate airlines on disaster preparedness for people with disabilities.

Soon after I came up with a prototype, we launched a Kickstarter for ADAPTS. It came right down to the wire, but we met our goal. From there, we filed patents, did our first inventory run, and started selling the slings at the Los Angeles Abilities Expo in February of 2018. Since then, we've been selling online and raising awareness at the Abilities Expos about emergency evacuation and disaster planning for people with disabilities.

We also attended Naidex in the United Kingdom, which is similar to the Abilities Expo here in the United States, where ADAPTS won the 2018 Changing Lives Award out of around 260 vendors.

They chose us based on innovation, usability, and cost.

ADAPTS started as a product for evacuating individuals from an airplane, but it has morphed into a tool for any kind of disaster evacuation as well as a sling for everyday use. Customers have been sending us pictures and emails saying they’re using ADAPTS at the dentist or to get in and out of a pool, for example. 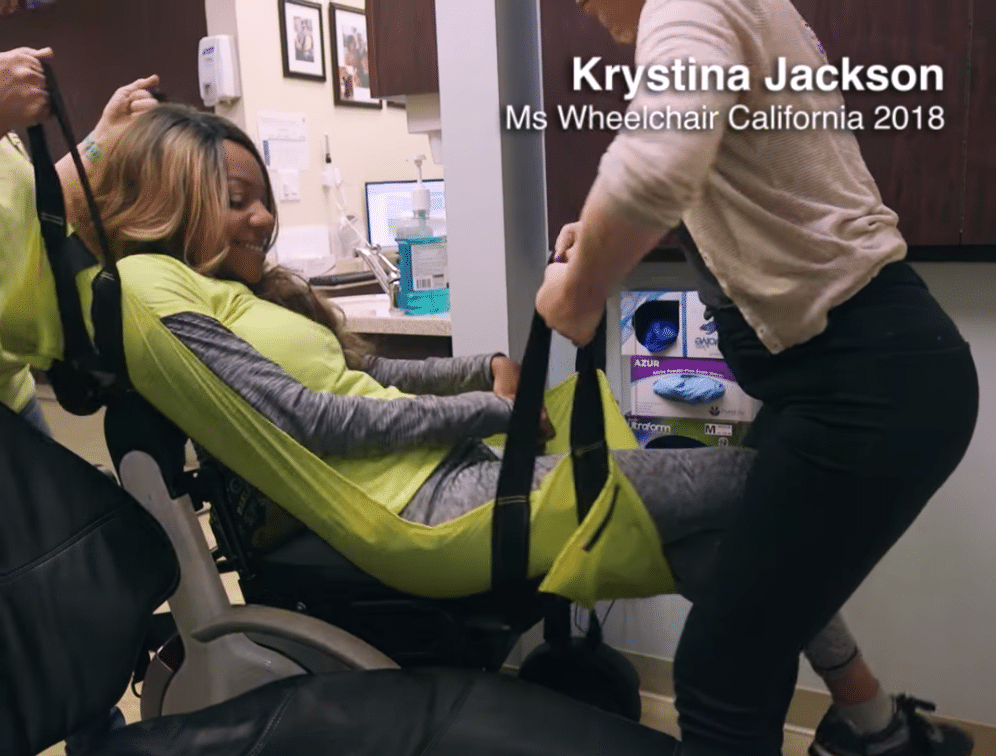 At Abilities Expo Chicago, we saw a mom stroll by with her little boy in a wheelchair, and we noticed she had an ADAPTS.

They had bought it at the expo the year prior, and they use it nearly every day.

The caregiver and mother both said ADAPTS has saved their backs by making lifting the boy less strenuous.

Made in the USA 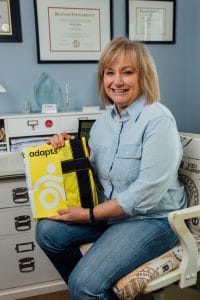 In the process of prototyping, we did focus groups with wheelchair users to get feedback about everything from the fabric to the color to how comfortable it is to sit on. They were instrumental in creating the final version of the product. We also created a disability advisory board that helped us with etiquette and gave us advice on how to work within the community. That was very valuable to us.

ADAPTS is made in the United States at Hentz Manufacturing in Indiana. Previously, the Vera Bradley brand was produced there, but when they moved their business overseas, many of the seamstresses in Indiana were laid off. Rather than shutting down the factory, Hentz worked to secure contracts with other brands.

By choosing this factory, ADAPTS has helped re-employ some of the women who were out of work.

They do an amazing job sewing our slings.

We also use a company called Pine Ridge Industries who employs people from the disability community. They do all of our quality assurance, packing, and shipping. 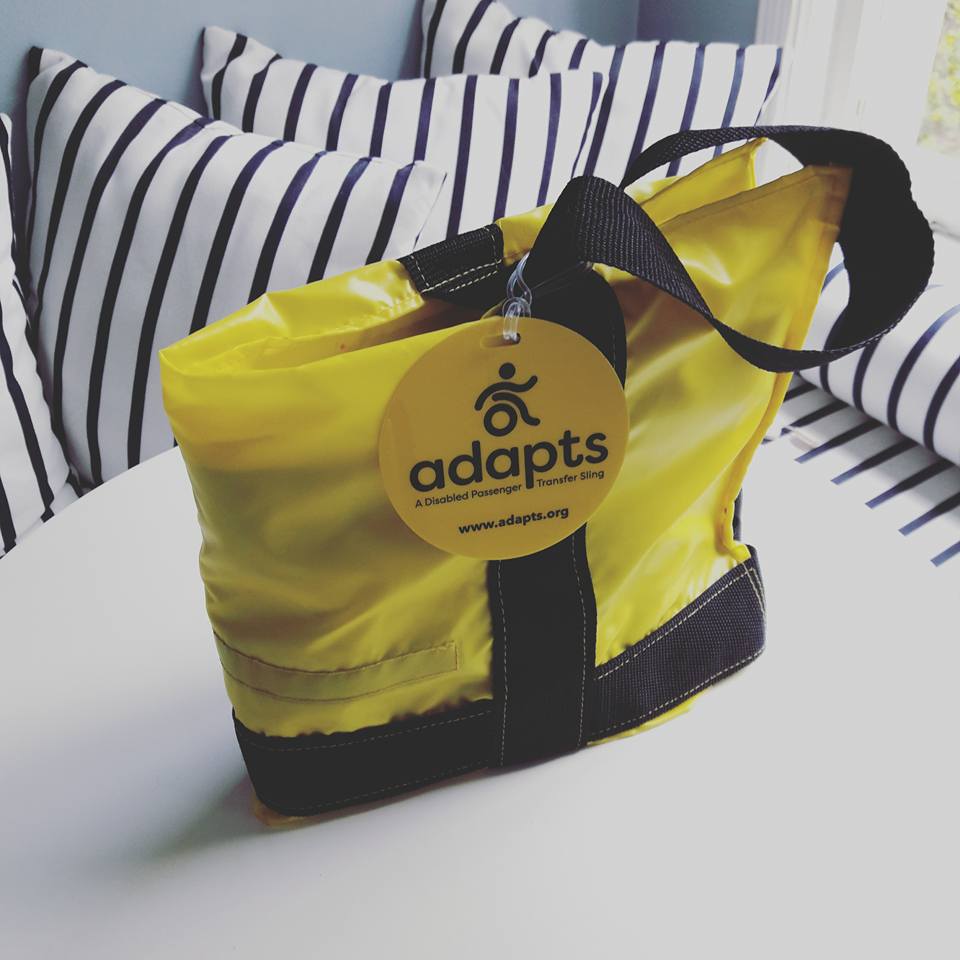 ADAPTS is a one-size-fits-all product and has been tested to hold up to 450 pounds. It also went through a thousand rounds of static and dynamic testing and passed with flying colors. In addition, the product meets the Federal Aviation Administration’s flame retardant requirements for use on airplanes.

ADAPTS only weighs about one pound and is approximately the size of an airplane seat.

It folds up into a tote that you can carry with you or put in a backpack.

Editor's Note: Wheel:Life readers can get 15% off online by entering discount code WL15 at checkout! 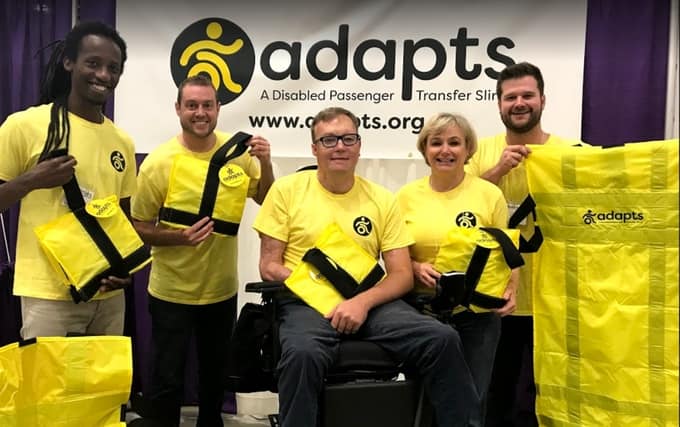 Last year, one of our customers was flying with her son who has cerebral palsy. While in the air, their flight was diverted, and they had to make an emergency landing and evacuate all of the passengers on the tarmac due to smoke in the cabin.

Her son was already sitting on his ADAPTS in his airplane seat, so they were able to get him off the plane quite easily.

After sliding down to safety, they gave their ADAPTS to the flight attendants so they could use it to evacuate an elderly woman waiting for help. This story shows that ADAPTS works both when a passenger is already sitting on their personal sling and also when the product is readily available for flight attendants to assist other passengers. 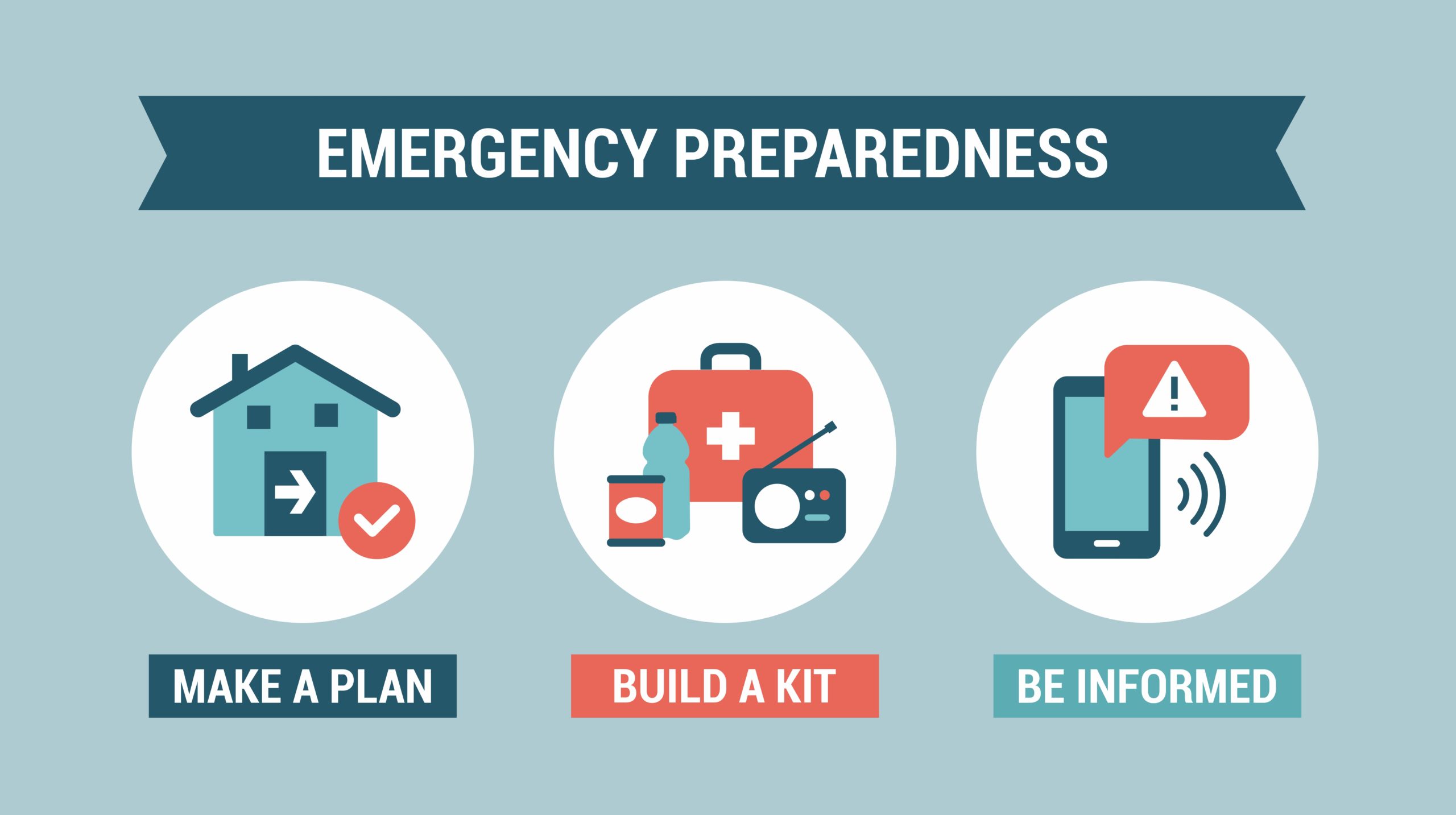 Airlines Need to Do Better

From the beginning, I started approaching the airlines about getting ADAPTS in the airplane safety kits. They've been receptive for the most part, but it's a long process, and we first need to get FAA approval.

I think the airlines will eventually come around. 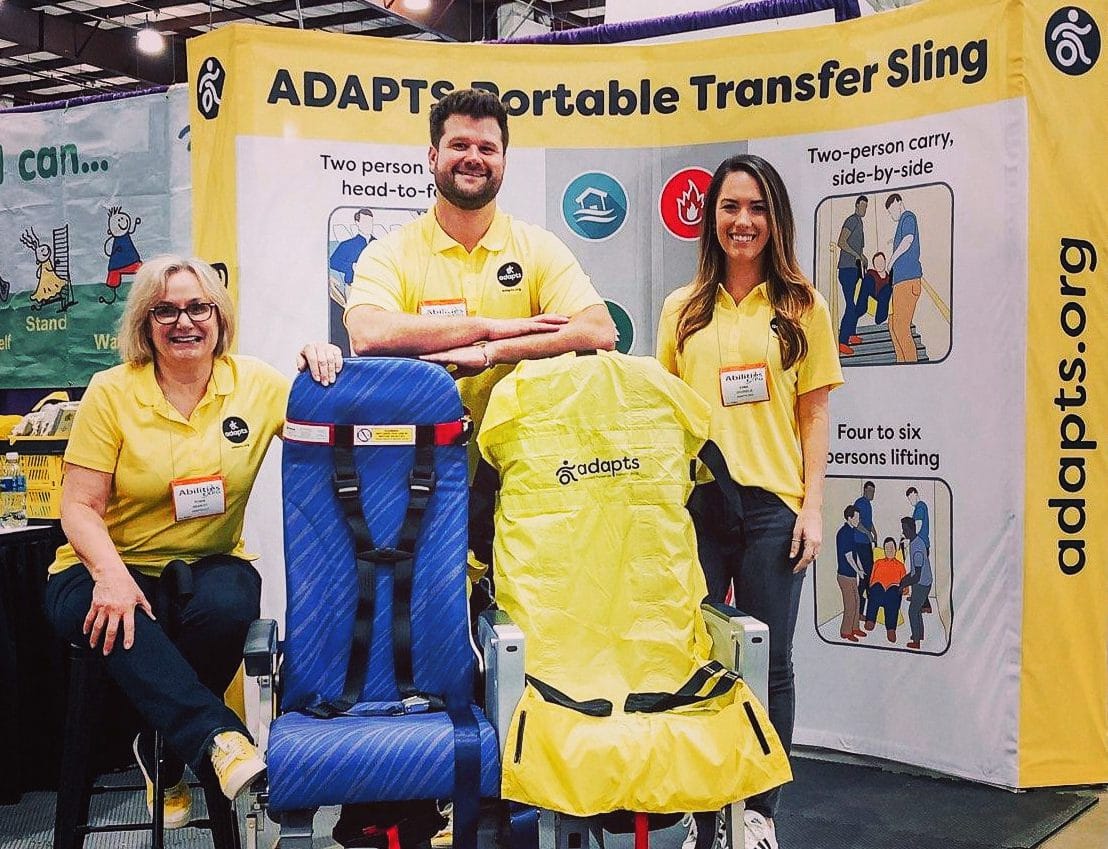 We conduct an ongoing survey on our website to get a baseline understanding of what wheelchair users experience when flying. We’re finding that around 80% of the time, the flight crew never has a conversation with wheelchair-using passengers to ask about how to best assist them in the case of an emergency evacuation. That only happens 20% of the time, yet it's a requirement. The airlines need to do better.

If they don't have an emergency evacuation plan for people in wheelchairs, they’re not truly accessible.

Editor’s Note: Wearley also serves on the board of directors of All Wheels Up, a nonprofit dedicated to finding a safe solution for wheelchair passengers to fly on commercial airplanes from the comfort of their own wheelchair.

For more information or to purchase an ADAPTS, visit adapts.org. For video tutorials on how to use the sling, visit the ADAPTS YouTube channel.

All information in this post was provided by Robin Wearley and adapts.org.